Nintendo is a stubborn company. For years it said a big ‘no’ to mobile games. But when it finally relented. its game sent millions of people into a frenzy. Tim Green reflects on the obstinacy that gave rise to Pokémon Go…

Yes, Pokémon Go is the sensation of the day. It’s the first smartphone release from The Pokémon Company, and from Nintendo, which owns 33 per cent of Niantic, the developer that coded it. 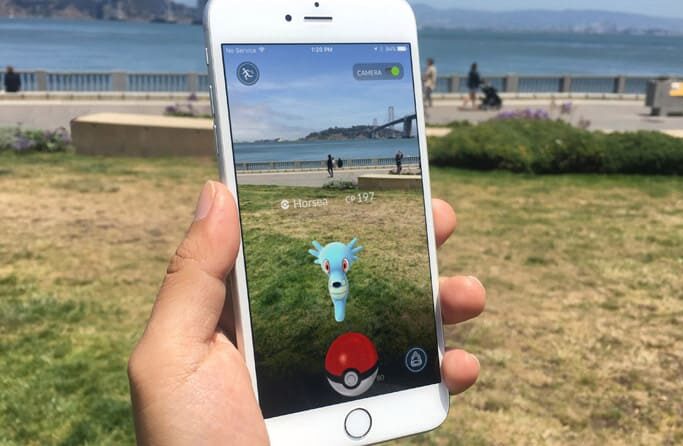 Nintendo CEO Satoru Iwata said at the time: “The objective of smartphones and social networks, and the reason they were created, are not at all like ours… their goal is just to gather as much software as possible, because quantity is what makes the money flow…

Players use the GPS signal to hunt down Pokémon in real world locations. When they do, the creatures are displayed using augmented reality (AR). Players can then throw things at them to collect them.

The title has just been released in the US, and one analyst estimates the free game is generating nearly $5 million a day from in-app purchases.

The success of Pokémon Go proves yet again that there’s nothing new under the sun, just a bunch of promising old ideas you can re-package brilliantly.

I’m sure there are MEF Minute readers who remember the Nokia/Symbian game Mosquitoes. It generated flying bugs in your phone camera you could follow round the air and shoot. It was mildly diverting. Then there was Ingress. This was/is a geeky GPS game that involves capturing real-life GPS locations for your team.

Pokémon Go wraps up these promising ideas into one irresistible package.

Its success proves yet again what an incredible company Nintendo is. For around 40 years, the Japanese firm has been simultaneously at the heart of – and slightly outside of – the video games industry.

Yes, I know that sounds contradictory. But what I mean is that Nintendo pretty much invented the games market and is responsible for its biggest brands: Mario, Zelda, Donkey King, Pokemon. And yet at the same time, it’s always ploughed its own furrow. For example, when Sony and Microsoft entered the console market, Sega, Commodore, Atari and others all threw in the towel and got out.

It’s been stubborn. And this stubbornness has seen Nintendo lurch from feast to famine: Game Boy sold over 100m units; Gamecube and N64 slumped; the Wii was so successful you had to mug a child to get one; the 3DS was a failed experiment.

Nintendo’s single-mindedness goes right back to the beginning of the video games industry. The brilliant book Game Over by David Sheff tells the whole story. In it, he describes how Nintendo came to America in the early 80s hoping to repeat its domestic success in arcade games.

The timing couldn’t have been worse. After a late 70s boom in gaming, the embryonic business had been destroyed by a glut of poor quality games. Video consoles sales had dropped from 8.5 million in 1982 to one million in 1985.

So when Nintendo’s mild-mannered sole employee Minoru Arakawa arrived in the US, he met a fantastically hostile reception. One toy retail buyer told Arakawa: “I have a dream job, I’m really well paid – and the reason I have this job is because the last guy bought too many video games.”

But Arakawa plugged away. And when Nintendo of America finally revived the games habit among US teens, its obstinacy saw off new threats. Like the one with Universal Studios.

In 1982, Nintendo was having some success in the arcades with Donkey Kong. Universal Studios’ president Sid Sheinberg got wind of this and decided to sue. He believed the game infringed Universal’s King Kong property. Universal has already intimidated Coleco, which was selling Donkey Kong on home consoles, into settling. Sheinberg assumed Nintendo would also fall into line.

At first Nintendo was prepared to do so. Universal called a meeting and it was all very polite, but at the last minute Nintendo’s legal counsel Howard Lincoln decided against doing a deal. He was suspicious about the potential lawsuit.

It was pure bravado. Universal sued. But Lincoln’s hunched turned out to be right. Nintendo’s research revealed that Universal had itself won a court case against RKO General in 1975, in which it proved King Kong was in the public domain.

The exact opposite of its own case now.

The Nintendo team went back to see Sheinberg, who assumed they were there to settle. After some pleasant small talk, Lincoln pulled the pin out of the grenade. This is how Sheff describes it.

“It’s simple,’ Lincoln said. ‘I wanted to tell you we aren’t going to settle and I wanted to do it by looking you right in the eyes. That, Mr. Sheinberg, is what I’m doing.”

Nintendo won its case in 1983. The company bought Lincoln a yacht to say thanks.

30 years later, Nintendo was still doing its own thing. By the early noughties, mobile gaming was breaking into the mainstream. Characteristically, Nintendo was dismissive of the new platform.

Nintendo CEO Satoru Iwata said at the time: “The objective of smartphones and social networks, and the reason they were created, are not at all like ours. These platforms have no motivation to maintain the high value of video game software – their goal is just to gather as much software as possible, because quantity is what makes the money flow – the value of video game software does not matter to them.”

Of course, in the end Nintendo did relent. But on its own terms. First it launched Miitomo – a kind of social network based around avatars – and then came Pokémon Go. They are not like other games.

And now here were are in the midst of Pokémon Go fever. But just in case you thought having a smartphone smash would loosen Nintendo’s commitment to owning its own hardware, think again.

Nintendo has made a Pokemon Go Plus $35 wearable add-on. It’s still pre-launch, but pre-orders on eBay are already sold-out. At $200 a pop.