Apple is looking to compete with Google’s Assistant and Amazon’s Alexa in the area of assistant/speaker devices. Until today Siri has not been able to fully match the other two competitors on speech recognition. This acquisition should be a valuable boost to its capability for natural voice language recognition. The war for ownership of a voice assistant is getting fiercer.

There is a bigger trend to be reported here: the increase of voice based service. According to Statista in Q4 2019 alone, Amazon sold 15 million smart speakers, and Google 12.5 million. Other Chinese vendors were reported shipping about 15.9 million devices (Alibaba, Baidu and Xiaomi), and these numbers are to be added to the about 380 million smartphones shipped worldwide each three months. The digital speakers / voice assistants are coming. Is this going to create a new voice-based service growth?

According to Statista, the use of voice enable assistants is reaching the mass market among Millennials (people born from 1981 and 2000). Already 39% of USA Millennials used voice search at least once a month in 2019. While the other segments are lagging behind – this is a trend growing year on year across Millennials, Generation X and Baby Boomers.

The Mobile Industry should play attention, this is potentially the latest change in the UI paradigm.

After all, the arrival of the ‘touch’ user interface created a new wave of content services based on ‘Apps’. It should not be much of a surprise that voice-enabled services would equally sit well with the original voice central medium: the phone. 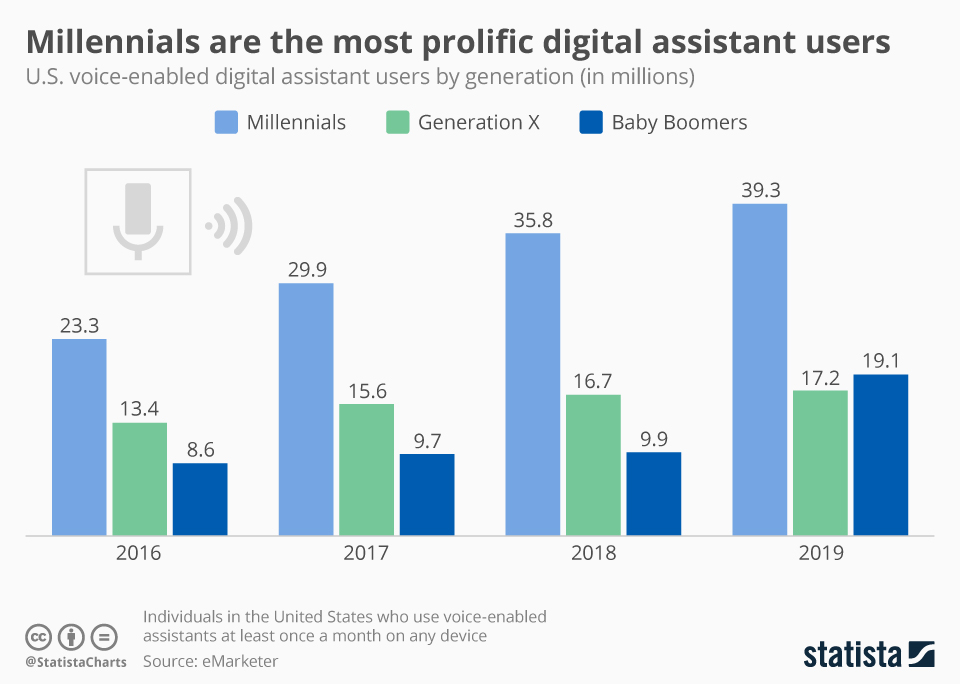 According to Tratica, the market for virtual digital assistants will reach $4 billion in 2022 and $7.7 billion in 2025 when VDA users will surpass one billion. The enterprise services there will be dominated by Customer Service & Marketing services, followed by e-commerce and healthcare, however, services such as Foreign Language Tutoring, and Tax Filing are included in the list.

There are 5 things to look forward in voice assisted UI services:

If your company is working in the Voice-Assistant economy, we would like to hear your experience and share with the members of the MEF – get in touch.