Is Covid The “Big Bang” Of Digital Payments?

Fintech specialists Mondato recently hosted a webinar in partnership with MEF on ‘Innovative Approaches to Commercializing Digital Payments.’ The panel consisted of digital finance practitioners with global reach, and the rapid evolution of the payment space has been noticed and felt by all, but particularly in emerging markets.

As we enter the second year of the Covid pandemic, headlines are still dominated by the global transition to digital, particularly across the payments space. Alongside the increasing business and consumer demand for digital financial services, perpetual news of fintech launches, partnerships and acquisitions signify a crowding and fragmentation of the payment space, across both developed and emerging markets.

As the industry converges around a similar set of fintech propositions, perhaps the industry is en route to a period of consolidation. We ask who will be left standing after the dust settles from what can be considered a “big bang” in payments.

While credit cards and other forms of digital payment were commonplace pre-pandemic in developed markets, many emerging market retailers and small-to-medium enterprises (SMEs) were still predominantly analog, causing a much more labor-intensive shift to digital integration. As discussed in a previous Mondato Insight, governments have promoted digitization through disbursement programs and regulation, and banks and fintechs followed suit in order to arm both businesses and consumers with the ability to send and accept digital payments.

The potential for a post-pandemic recession, particularly in poorer countries, coupled with an influx of payments players and propositions have driven many stakeholders to reassess their approach to investing in the space. Investors, in particular, have taken a more bearish stance on early and venture stage fintech funding, whereas the deal flow for later-stage fintech companies actually increased from 2019.“

But the ability to leverage existing technological innovation, along with the rapid penetration of smartphones, have powered a healthy pace of digital transformation across emerging markets. Payments, which were previously owned by financial services providers, now penetrate the minds – and service offerings – of all corporates as embedded finance reshapes distribution and creates additional demand for seamless payment integration through services like Buy Now, Pay Later (BNPL) or QR codes. The embedded finance opportunity is expected to be worth US$3.6 trillion by 2030, and banking-as-a-service will play an important role in building new revenue streams for retailers and other corporates.

Mahesh Narayan, Global Product Lead for Mobile Money & E-Commerce at Standard Chartered Bank, was one of the webinar participants who noted that previously, if you were a multinational corporation with a solid brick-and-mortar set-up, a digital approach was not necessarily required, and this has rapidly changed. “Now all corporates need to embrace the omnichannel experience – and payment is typically how it begins,” according to Narayan.

When asked whether the flurry of industry activity was permanent or pandemic-specific, the panel concluded that while growth and fragmentation will continue, a harmonization will emerge as standards become more institutionalized and regulated. While it may be too soon to know which behaviors will continue post-pandemic, research suggests that preference for online and digital purchasing will become the new normal globally. And as the different types of schemes and options of fintech services available begins to plateau, the trend toward consolidation will likely present itself. But in order to survive, fintechs that can support these increasingly popular digital payment solutions will need to outlive the economic pressures presented by the pandemic.

A Shift in the Investment Landscape

The potential for a post-pandemic recession, particularly in poorer countries, coupled with an influx of payments players and propositions have driven many stakeholders to reassess their approach to investing in the space. Investors, in particular, have taken a more bearish stance on early and venture stage fintech funding, whereas the deal flow for later-stage fintech companies actually increased from 2019. Startups and less-established fintechs struggled to secure venture capital while already-profitable companies enjoyed hefty valuations and an inflow of capital. A CB Insight report found that VC-backed activity dropped to the “lowest level of deals since the first quarter of 2016,” with an overall drop of US$6.1 billion.

But established companies continued to flourish, with 67 fintech unicorns globally valued at over US$250 billion in aggregate. Indonesia’s Gojek, for example, secured US$3 billion, and Stripe received US$850 million; Chime also secured more than US$1.2 billion over two rounds, pushing its valuation to US$14.5 billion. 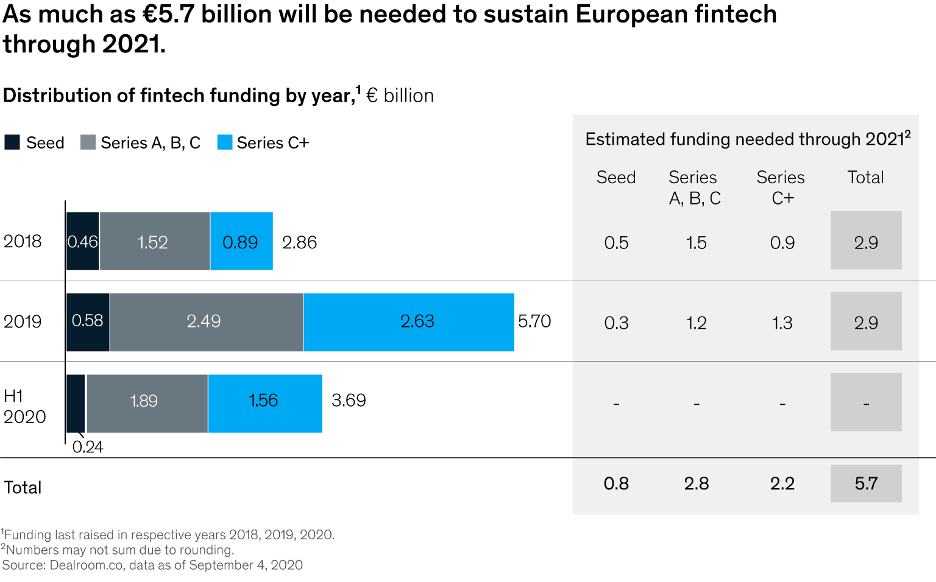 Because early stage fintechs have a greater need for continuous capital, they may soon feel the pressure as venture capital funding slows — if they haven’t already. While certain categories of the payments industry may benefit from the acceleration to digital, companies focused on hard-hit verticals like travel, events and entertainment may struggle to weather the storm in the short-term. Some companies have been able to pivot and reduce risk by investing in additional features. Square, for example, reported their card present volume down 60 percent at the end of 2020, but they were able to build out and leverage their Cash App to offer loans to consumers. But for those just beginning to establish their brand, significant funding is required to refine value propositions while attracting new customers at scale; a shortage of capital will likely only exacerbate and expose business model vulnerabilities.

A study by the Center for Financial Inclusion found that fintechs are now seeking bridge rounds of funding to act as a ‘cash buffer’ to extend their relatively short cash runway. Only 29 percent of surveyed fintechs had a year or more of cash reserves, and a majority of these were already in growth stage. The slump in funding will only contribute to further industry consolidation, as a downward pressure on valuations force less profitable players to be swallowed by larger ones in order to merge resources and sustain growth. A recent Mondato Insight explores the implications of this occurrence on the remittance industry in particular, though the trend extends beyond money transfer to all corners of the digital finance ecosystem.

The Silver Lining for Banks

Just a few years ago, banks and fintechs were often in competition. A 2015 Mondato Summit even featured a panel on partnerships between the two entities where they called each other “frenemies.” This sentiment has since given way to symbiotic collaboration that will be vital to both of their survival. While banks maintain the advantages of scale and trust — especially with fraud as a looming concern when digitizing payments — the pandemic has put them under pressure to expand digital services. Fintechs, on the other hand, have the advantage of better, more agile technology and user experience, but they may lack the capital and extensive black book of relationships to properly scale.

Banks must maintain outdated, legacy infrastructure while enhancing value propositions, which in the current climate present challenges that demand new or deepening fintech partnerships. Lower valuations and dried-up funding for smaller fintechs create a unique opportunity for banks to buy them up in hopes of delivering digital services more quickly and effectively, which will be essential in revamping business models to comply with evolving customer expectations.

Instant and alternative lending is one subsector likely to seek M&A transactions with heavy bank involvement, with B2B lending already experiencing a flurry of activity. OnDeck was acquired for US$90 million, and American Express acquired Kabbage following SoftBank’s US$250 million investment, confirming the snowballing value of SME lenders’ value proposition, particularly those that can survive amidst consolidation.

“These new fintech companies have been able to outpace and out-innovate traditional vendors, and then those vendors realize they have to catch up and a great way to catch up is M&A. Whether it’s Visa buying Plaid and continuing to own a pretty important connector in the fintech ecosystem, or Intuit with Credit Karma, those are signs of these companies trying to catch up and stay relevant over the next 10 plus years.”
Jules Maltz – Partner, IVP – a later-stage venture capital & growth equity firm

Maltz’s comments apply to the greater B2B fintech ecosystem as well. Pandemic-fueled digitization has forced businesses to simplify and digitize not only loans, but other parts of the value chain like payment processing and billing. A recent survey of European banks found that 63 percent are required to support both international and domestic transfers for up to 50 percent of their business customers. And though e-invoicing solutions have been popularized in developed markets, there is a significant emerging market demand for efficient digital solutions that can digitize and simplify B2B billing processes. As providers of these services seek partnerships, traditional banks are well positioned to provide optimal distribution of these services since they already have the benefits of pre-existing corporate relationships — as well as brand recognition and customer loyalty.

The Race Is On

Although fintech acquisition prospects for banks are promising, it is big tech that has recently dominated the payments M&A activity. With more cash in hand and an already ripe appetite for edging into the fintech sphere, companies like Google, Facebook, Amazon and Netflix can exploit the current state of flux to deepen their footprint across the payments space. Amazon’s new division on ‘Digital and Emerging Payments’ intends to roll out a digital currency product aimed at emerging markets — beginning with Mexico — that will enable customers to convert cash into digital currency that can be spent on digital products and services within the Amazon ecosystem. Similarly, Google recently formed a partnership with Global Payments, part of which will integrate Google’s APIs with Global Payments’ payments ecosystem to deliver end-to-end solutions to merchants.

Such initiatives signal big tech’s belief that payments can serve as a major revenue generator for non-fintech companies like themselves. Chinese social media giant Tencent already attributes 28 percent of its revenue to payments, and this stream of revenue potential has wooed all of the tech behemoths to join the payments race to some degree. With big tech financing on the rise, it is only a matter of time before they dominate the fintech space either through their own payment products or via partnerships and acquisitions.

Perhaps Covid-19 will be seen as the originating point, or “primeval atom” that catapults the “Big Bang” of the digital payments sphere, of which the end result is yet to be seen. After its initial expansion, our universe went through a period of cooling in which many of the lasting stars and galaxies that we see today were formed. The same process may come true in this scenario. Rising demand for digital alternatives will continue to change the payments landscape, with an explosion of players and business models entering the space. Eventually, though, the noise will recede through consolidation as established businesses scale and smaller ones disappear or are bought out.

Whether the winners are banks, big tech, scaled fintechs, or a combination, those who are left when the dust settles will surely capitalize on the industry’s transformation. While stakeholders explore how to embrace and react to the “new normal” of shifting behaviors, mindsets and expectations, one thing is certain: complacency is not an option.