The new year is here, but what will be the big trends and changes for the mobile ecosystem in 2019?

We convened some of MEF’s Board Directors to discuss their expert views on the top ten predictions including that MNOs will focus on 5G; regulators will copy GDPR and RCS will continue to gather support (launch).

The five Board Directors are:

(* Robert was unable to take part in the webinar, but we include some of his written comments)

1) MNOs will go back to basics, sell off content services, and focus on launching 5G

The last few years have seen the world’s biggest MNOs get back into the content game. There have been acquisitions, mergers and strategic partners. But more recently, the trend has been reversed. Last week, for example, Yahoo wrote off $4.6 billion from the value of its AOL and Yahoo acquisitions, half of the amount it paid for them.

Dario Betti believes this is a sign of things to come. “Possibly we’ll see them admit it was a mistake. AT&T spent $85 billion buying Warner but they may need a similar sum to invest in 5G. I expect some of the smaller carriers to move away from content and refocus on their core business.”

Two-factor authentication – using the text passcode as the second factor – has exploded in recent years. Analysts believe it now comprises the biggest sector of the enterprise messaging market. In 2019, this will continue. As such, the mobile will consolidate its status as the ‘central account for digital services’.

GDPR is being copied in California and Brazil and Australia and we’ll see more of that. There will be small changes, but the prime features of individual control, explicit and informed consent and data portability will apply everywhere.”

That said, there will be a limit to the extent the device itself can fulfill this role, says Andrew Bud. “The old methods like passwords are dead. They’re being phased out. There’s a view that your mobile can be your identity: the SIM or some token inside your phone,” he said.

“But it is just one factor, and it ignores the fact that we live in a multi-device world.  So yes mobile can be part of your ID. It has to be a synthesis of what’s in the cloud and what’s on your device – and not just one device.”

3) GDPR will be emulated around the world

EU countries set an example for the rest of the planet when they rolled out GDPR. The regulation mandated practices around consent and the ability of consumers to delete and port data. The MEF panelists believe other jurisdictions will mimic it in 2019.

Julian Ranger said: “GDPR is being copied in California and Brazil and Australia and we’ll see more of that. There will be small changes, but the prime features of individual control, explicit and informed consent and data portability will apply everywhere. In time, the idea that brands will do one thing in one region and something else in another will go away. And they will stop thinking about the law in terms of compliance, and start to look at the advantages and new business models it could bring.”

Rafa Pellon added: “Brazil’s new privacy law is coming in 2020, and countries like Mexico, Argentina and Chile are looking at assimilating some GDPR-like regulations. Concern about privacy is rising. But for enterprises it’s mostly a niche, and a compliance issue.”

4) There will be GDPR-inspired lawsuits

Today, a few months after GDPR was launched, most consumers know little about GDPR beyond the appearance of warnings and consent forms on some websites.

However, the panel still believes the regulation will inspire lawsuits. Ranger expects the long term consequences to be positive. “Most individuals may not be aware of the issues, but in the aggregate lawsuits will reinforce the movement away from using tracked and background data.”

The panel agreed that the so-called ‘personal data economy’ will start to win traction in 2019. But it won’t be based on fear of regulation. Instead, it will be based on new business models that harness trust and the ability to share data safely.

Ranger said: “Businesses will start to see that when you have trust, you can get even better data. There will be confusion as they work out how to they access this data. But by the end of the year some solutions will start to emerge. That developing shift, sometimes called MyData or Internet of Me, will become more widely known.”

MEF regulars will recognise the growing hype around RCS. It’s been a major topic of conversation in 2018. Next year will see more noise – and yet more support for the channel (and more launches).

Robert Gerstmann said: “We will see 100 per cent of operators come to support RCS A2P during 2019. At the same time, the renewal cycle of handsets will mean that more and more Android users will have RCS capable handsets. Operators will slowly release pricing enabling enterprises to do their investment business cases. Apple support for A2P RCS will be the big question mark for 2019.”

Betti added: “Are all MNOs ready to launch RCS? No. It’s 26 per cent according to MEF research. That’s still a big number, and a good starting point. But there’s still a lot to be ironed out.”

In 2018, MEF research revealed the good work done in combating ‘obvious’ SMS fraud. This was thanks to firewalls and industry action (not least the MEF code of conduct). The panel expects this to continue in 2019.

Andrew Bud said: “MEF is part of the solution here. Fraud and grey markets has largely been addressed in many markets. There are still many more issues – phishing etc – and MEF, the operators and OFCOM have been working on a verified system to tackle it.

“It’s important to distinguish between social engineering and the real cyber security issue. The industry is in a much better position to combat social engineering than email, for example. Ultimately there’s a limit to what can be done about cyber crime.”

8) AI will accelerate, but it will confuse governments

Advances in AI and machine learning will certainly accelerate in 2019. As will ethical concerns. However, there seems little prospect of law-makers engaging usefully with the topic.

Pellon said: “Legislators don’t know too much about the issue. They don’t really understand it, and the speed of development of the technology is getting faster. Meanwhile consumers are worried.”

Careless IoT is a bit like climate change. You can get away with it for a while, but in the end it will get you. Government and regulators will need to find approaches to fight this, but there’s still no consensus around what these approaches will be.”

9) There could be a major IoT data breach

Like AI, IoT is another area marked by relentless development and widespread worry. Security is a major concern. Hackers could cause serious societal damage.

Bud said: “Careless IoT is a bit like climate change. You can get away with it for a while, but in the end it will get you. It can cause cataclysmic consequences that are quite horrifying. I think there’s an accountability problem. Services created by company A and B can be used to attack entity C without any consequences to A and B. Government and regulators will need to find approaches to fight this, but there’s still no consensus around what these approaches will be.”

Over the last decade mobile users have turned away from voice towards email, SMS and messaging apps. Now, with the rise of smart speakers and voice activation, speaking is back.

Dario Betti is delighted. He said: “I’m glad about this. Mobile telephony started with voice. Then it was overtaken by the success of touch-screen and apps. Now, there’s a re-emergence. The voice speakers are helping with that, and we’re dusting off some of the old voice services. It’s a great opportunity.”

Agreee? Disagree? Leave your thoughts in the comments below 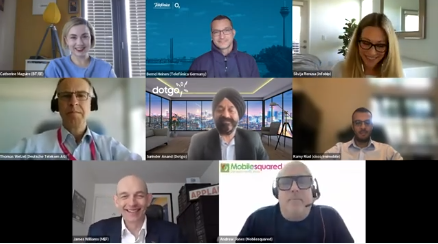