Indian Mobile Congress gets a headstart on the very first day

Indian Mobile Congress, country’s first Mobile, Internet and Technology expo kicked off on September 27 at the Pragati Maidan, New Delhi. The event started off from 27 September to 29 September and will be attended by over 500 startups and over 2,000 delegates from India and other countries.

The Indian Mobile Congress will feature over 300 attendees from different sectors. The three day event will have 21 sessions with themes like Digital India, Internet Governance, Women in Tech among others. After the sessions, two startups will pitch their idea.

The event was attended by many big names like Mr. Ravi Shankar Prasad, Mr. Manoj Sinha, Mr. Mukesh Ambani, Mr. Kumar Manglam Birla, Mr. Sunil Bharti Mittal among others. IMC is expected to attract over 1,50,000 people over the three days.

I asked Tinder for my data. It sent me 800 pages of my deepest, darkest secrets

At 9.24pm (and one second) on the night of Wednesday 18 December 2013, from the second arrondissement of Paris, I wrote “Hello!” to my first ever Tinder match. Since that day I’ve fired up the app 920 times and matched with 870 different people. I recall a few of them very well: the ones who either became lovers, friends or terrible first dates. I’ve forgotten all the others. But Tinder has not.

The dating app has 800 pages of information on me, and probably on you too if you are also one of its 50 million users. In March I asked Tinder to grant me access to my personal data. Every European citizen is allowed to do so under EU data protection law, yet very few actually do, according to Tinder.

With the help of privacy activist Paul-Olivier Dehaye from personaldata.io and human rights lawyer Ravi Naik, I emailed Tinder requesting my personal data and got back way more than I bargained for.

Delta announced today that starting October 1st, it will offer free WhatsApp messaging on all of its Gogo-enabled flights, making it the first airline to offer free access to the messaging service. Facebook Messenger and iMessage will also be supported and all three messaging services will be accessible in flight through the airline’s WiFi portal page.

Delta has been testing out a number of other services aimed at streamlining the flight experience and reducing hassle. These include kiosks that let you video chat with an airline rep, replacing boarding passes with fingerprints and using face scans to check baggage. Delta also began rolling out RFID tags for luggage tracking and a map that allows customers to see exactly where their baggage is and where it has been.

While some of those programs — like the biometric identification — might not be everyone’s cup of tea, pretty much anyone can get behind free in-flight messaging. There is a caveat, customers will only be able to send texts, not video or photos.

The decision not to renew Uber’s licence to operate in London has given rival apps a boost, research suggests.

In the 48 hours following the decision, Addison Lee, Gett and MyTaxi all saw a spike in downloads, according to analytics company App Annie.

All saw thousands more downloads than usual, despite Uber continuing to operate in London as usual while it appeals against the licence decision.

The rival apps remain dwarfed by Uber, which was still downloaded the most.

Stock trading apps have millions of users worldwide and process billions of pounds in traded shares but the security of the apps compares poorly with comparable mobile banking applications, security firm IOActive warns.

Alejandro Hernandez, senior security consultant at IOActive, found vulnerabilities that could allow the would-be hacker to sell user’s stock, steal money or snoop into the personal details of the user’s net worth and investment strategy. Hernandez put 21 of the most used and well-known mobile trading apps available on the Apple Store and Google Play through their paces. Testing focused only on the mobile apps; desktop and web platforms were not tested.

Today, Apple is launching a new version of its privacy page that presents security and privacy as a consumer feature set. This effort to position Apple as a provider of security and privacy services that manifest as features was begun back in September of 2014, in the wake of the celebrity nude hacking incidents.

Earlier that month, I had published a piece arguing that Apple needed to be less opaque about its security and privacy systems and policies, because they were substantially different and more important than a ‘product reveal’. While Apple had been making the security and privacy of its users for years at that point, that’s essentially where its new era of transparency and salesmanship around the topics began.

Less than a quarter of mobile media planners are verifying data

Only 24% of mobile media planners are using third-party verification providers to verify the data they rely on, a study has found.

This finding is based on a survey of more than 150 mobile ad buyers in the UK by location-based data company GroundTruth in conjunction with ExchangeWire.

Nevertheless 70% plan to use a third party to validate their mobile location data and the number of mobile media planners engaging third-party verification companies is expected to increase to 45% in the next year.

When asked about the primary benefit of independent measurement, there is a disparity between mobile media planners using third-party measurement providers and those who are not.

Over two-fifths (42%) of users said the primary benefit of being third-party-verified is being able to instil confidence in their clients that they are getting value for their money. For those not using third-party providers, the figure is only 29%. 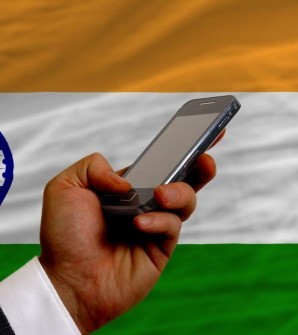 NEW DELHI: India will have nearly 1500 factories making handset and ecosystem product by 2020, the local handset industry association said, even as players like Foxconn said that the Indian opportunity was big enough to make 1 billion devices, but policy stability would be key enabler.

“Right now, we have 104 factories… by 2020, we expect that 1450-1500 plants will come up through the phased manufacturing program,” said Pankaj Mohindroo, president of Indian Cellular Association.

On being asked whether next 1 billion phones can be made from India by the world’s largest contract manufacturer, Josh Foulger, head of India operations at Foxconn said that they could make in 10 years, but the larger question was whether it can be done in five years, given India’s potential.

BBVA ports 92% of product portfolio to the mobile

BBVA’s mobile banking strategy is picking up pace, with the bank predicting that virtually its entire portfolio of Spanish banking products will be available as an app-based service by year-end.

The bank says that its mobile banking app has gone from offering 16% of products just three years ago, to 82% today, and will reach 92% next December.

In August, the bank reported over three million mobile customers in Spain, with product sales via the smartphone now surpassing online applications from the bank’s Website.

The Spanish bank says interactions via the mobile app have seen a 135% increase over the course of the past year, rising from 23.8 million in May 2016 to 56 million in May 2017. Mobile app subscribers have grown by 30% over the past seven months, continuing the strong momentum that has been in place since December 2015, when the bank had 1.9 million mobile customers.

Jacquard: Google and Levi’s ‘smart jacket’ that you can only wash 10 times

Google and Levi Strauss have partnered to make a “smart jacket”, and the end result is exactly as good as you’d expect from a collaboration between the companies that brought you a set of glasses people actively hated and a hideous touch-sensitive watch (that one was Levi’s).

The apparel, a $350 denim jacket branded as “Levi’s Commuter Trucker Jacket with Jacquard by Google”, is the first product of a two-year-long collaboration between the two firms that started back in May 2015 with the intention of making a pair of “smart jeans”. The idea was to use a newly designed conductive fabric to allow the garment to send data and power without the need for wires.

Since then, the plan has clearly changed, but the basis remains the same: the jacquard fabric is integrated into the jacket, and allows the smart features to work.