MEF CEO Dario Betti takes a look at African e-commerce market Jumia, billed as the Amazon of Africa, it is undergoing something of a re-imagining.

Amazon, the world’s largest global online retailer, has not been able to enter developing markets: the challenges remain too great even for the dominant player. Overall the difficulty of operating in Africa has kept Amazon out of the continent (with the notable exception of AWS services) and Alibaba, despite having talked about entering the market, has not yet made a significant investment.

However, local e-commerce platforms have been fighting in these markets against the low penetration of digital services, minimal presence of digital payments, and scarce logistics/delivery solutions.

Jumia is the most likely of these that could be compared to Amazon: it has a large African footprint, it is listed on the NYSE, and it integrates multiple business under one brand (from marketplace, to payment, delivery and food). However, Jumia has grown specifically to fit its very different, very African environment.

JumiaPay is the strategic tool to guarantee a lock in mechanism, returning clients and additional profitability in the thin margin e-commerce solution business.”

Jumia: the darling of the Africa e-commerce, but now back to business

Jumia is an African success story, the first tech start up to achieve unicorn status (a valuation of over 1 billion USD). That valuation arrived in 2016, after a funding round that included Goldman Sachs, AXA and MTN.

In April 2019, Jumia went public on the New York Stock Exchange and raised $196 million in net proceeds. The share price, initially offered at 14.50 USD, rose more than 200% in the first three trading sessions.

After reaching a peak of nearly $50 on May 1, 2019, the share value has declined to under $5 per share by year’s end, currently the share price is at $7 (February 2020) – a capitalisation of $505 million. After a frenzy of attention. The company fell hard form its stellar valuation.

Today, Jumia is trying to grow organically and profitably – that means that far from the growth metrics of its start-up days it now wants to create a profitable and sustainable business. The focus for Jumia is to balance growth with monetisation and the cost efficiency.

JumiaPay, their payment service, is the strategic tool to guarantee a lock in mechanism, returning clients and additional profitability in the thin margin e-commerce solution business.

The new mantra of the company is about repeat purchases and loyalty to the platform. In other words, Jumia is preparing to fight off the large competition that might one day arrive by scaling up and to locking-in customers. Jumia is also looking at cost efficiency: it has been reviewing its portfolio of assets and geographies, as well as keeping general costs under control.

Jumia Operations: an Amazon inspired model for the African Continent

The company is dealing with the special requirements of the African countries. Jumia had to compensate weak commercial infrastructure: it developed its own remote payment and logistics arms. And the price sensitivity in these markets means it has to operate in a cost-conscious way to be able to offer competitive low prices.

Jumia is an e-commerce platform, a marketplace, for electronics, travel and fashion and others vertical categories. It started in 2012 from Lagos, Nigeria. The company currently has a presence across more than 14 African countries, but its footprint keeps on changing for new markets are opened regularly but also it has been closing under-performing operations. Egypt, Morocco, Ivory Coast, Kenya and South Africa are its original five territories from the 2012 launch; by 2014 Uganda, Tanzania, Ghana, Cameroon, Algeria and Tunisia were added. In South Africa, Jumia operates under the brand name Zando, focusing only on online fashion retail. Its main competitors would include Kilimall in Kenya and Konga in Nigeria.

The company also runs a logistics service, which enables the shipment and delivery of packages from sellers to consumers, a payment service, Jumia Pay, which facilitates transactions among participants active and Jumia’s platform in selected markets. It has partnered with more than 50,000 local African companies, shops, and individuals that are hosted in the marketplace platform as sellers. 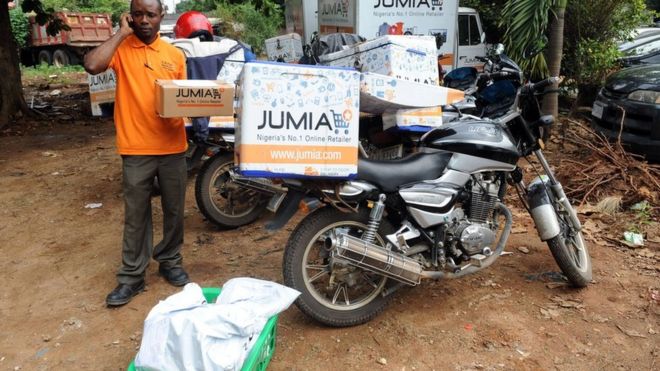 The Jewel of Jumia: Jumia Pay

In 2017, Jumia launched Jumia One, an app that enables customers to pay bills such as airtime – a key market to attract mass traffic in prepaid driven telecom markets. An important part of the solutions for developing markets. The same year, Jumia launched Jumia Pay, the payment solution or people to shop on all Jumia services. This was followed by the Jumia lending program, an initiative that allows its vendors to access business loans. Jumia Pay is an important element of the offer allowing to support financial services in largely unbanked markets.

Jumia Pay now provides 2.1 million transaction in the 3rd quarter of 2019 (worth Euro 32 million in value), a small number for a payment service, but one that has seen a considerable growth.

The impact of cost control: retrenching

The hope of a quickly built profile as a multiservice vendor had to be reduced – the limited profitability from the African markets did not match the initial aspirations. A focus on cost efficiency is now the key mantra from its renewed management.

In November 2019, Jumia announced it has stopped its e-commerce operations in Cameroon and Tanzania. The company came to the conclusion that the e-commerce portal could not survive in the current economic conditions. A month later the company suspended Jumia Food in Rwanda, making it the 3rd country in two months as part of a continuous monitoring of the business environment and operating costs.

On 9 December 2019, Travelstart agreed to white-label its hotel booking platform for Jumia Travel, lowering the operation impact for Jumia: under the agreement, Travelstart took control of the sales, fulfilment and customer service aspects of Jumia Travel online booking websites in all its operating territories.

Jumia is back to growth and on the way to finding its financial stability. It has to balance its appetite for expansion in markets and products, with the limited profitability of its business.

In 2015, Jumia generated €215 million in revenue, but by September 2019, it generated gross sales worth €275 million in the single quarter, pushing to a run-rate figures over the 1 billion mark per year. In the markets places 7 million orders took place in the same months. The number of Annual Active Consumers was 5.5 million, up from 3.5 at the 30th of September 2018. The online platforms added about 636,000 consumers per quarter in 2019, doubling its monthly intake from the previous year. However, Jumia remains a loss-making activity: in the 3 months to September 2019 it lost €55 million (a 34% increase from the previous year).

Jumia still remains a highly regarded potential player in the world of e-commerce, but this will depend on its ability to grow profitably. This company is set to remain the benchmark for African e-commerce, its more realistic approach to grow is a welcome step towards maturity.