Every week, MEF Minute scours the web for the most relevant industry data so you don’t have to. Today we take a look at the future of enterprise messaging, the mHealth market, the continued rise of the mobile camera, location based services and more…

Never mind all those stories about the decline of ‘personal’ SMS – the ‘application to person (A2P) is flying.

Transparency Market Research says the global A2P SMS market will surge to $70.32bn by 2020. It generated $53 billion two years ago.

Its report studies to impact of A2P SMS on verticals such as entertainment, banking, financial services and insurance (BFSI), retail, tourism, marketing, media, and healthcare.

But it concludes the key drivers will be payments, banking, and marketing activities – especially with post-transaction notifications and one time passwords. 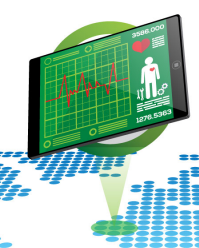 mHealth market to gross $18bn by end of next year

Despite all the barriers of regulation and nervousness around privacy, the global mHealth sector is surging towards huge value.

A new study by Research and Markets says mHealth will hit $18bn in 2016 and will grow by a CAGR of 40 per cent over the next 5 years.

Of course the sector is made up of many diverse elements, with software, hardware and data analytics all contributing a piece. This report suggests mHealth centric wearable devices will account for over 130m unit shipments by the end of 2020.

Meanwhile big data and analytics specialists will invest $4bn by the same year.

The report argues that pharmaceutical companies will drive the market forward by using smartphone and tablet apps to monitor patient wellbeing. They’re doing it better results and also to save money. Indeed, the report says that by the end of 2016, mHealth could save up to $340bn in annual healthcare spending.

The traditional camera market may be in decline, but demand for camera modules has never been more buoyant.

A new market report by Yole Développement says the mobile phone and automotive sectors will boost demand for compact camera modules by 2.5 times over the next five years. The market will be worth $51 billion by 2020.

Mobile phones will account 74 per cent of these revenues – that’s $38bn – as manufacturers meet demand for ever higher quality photos and new innovative features such as auto focus and optical image stabilisation.

Another key area for the sector is automotive. Yole argues that cameras are shifting from an add-on feature to must-have standard equipment in cars. Thus automotive module revenue will grow from $1.2bn in 2014 to $7.9bn by 2020.

Where next for mobile location-based services? €34.8 billion in revenues

Search, social and entertainment are driving the mobile location-based service (LBS) to a 22.5 per cent annual growth rate.

Berg Insight reckons revenues for LBS will go from €10.3bn in 2014 to €34.8bn in 2020. It cites a growing user base and competitive service providers for the boom. Specifically, it says Google, Facebook, Baidu, Tencent, Twitter and Yahoo accounted for 60 per cent of global revenues in 2014.

China Mobile has over 50m cellular M2M connections while China Unicom has 14.5m, says a new study by Machina Research.

Meanwhile China Unicom is forming partnerships with global players. It signed an agreement with Telefónica for the joint development of products and services in M2M in 2011.

The global smartphone market will grow 10.4 per cent this year

Demand for smartphones continues to rise, but it’s nowhere near what it was.

Stars from IDC’s Worldwide Quarterly Mobile Phone Tracker show smartphone shipments will grow 10.4 per cent this year to 1.44 billion units. However, the market rose 27 per cent in 2014.

IDC says China is the main reason. Essentially, it’s becoming a saturated and mature market. China consumed 32.3 per cent of all new smartphone shipments in 2014. Shipments should grow 1.2 per cent in 2015, which is down from 19.7 per cent in 2014.

Despite the global slowdown, demand will still rise thanks to falling prices, with global shipments reaching 1.9 billion units in 2019.

IDC predicts surging demand for phablets especially after Apple entered the market with iPhone 6+. It says demand for devices featuring 5.5 inche to 6 inch screens will grow 84 per cent in 2015 compared to last year.

However, it doesn’t expect any major challenge to the dominance of iOS and Android, with the latter’s 81 per cent share in 2015 carrying forward until 2019.

The average Brit spends 2 hours 51 minutes per day actively using the internet at home and work – and just under half of it is on a mobile.

According to the Internet Advertising Bureau UK (IAB) internet time is split 1 hour 16 minutes on PCs/laptops, 1 hour 9 minutes on smartphones and 26 minutes on tablets.

The study tracked the the behaviour of 73,000 people on thousands of sites and apps, and only measured “active attention” when people are actively using the internet to do something.