Mobile Money security fears, operators take on Whats app in LatAm, mobile taking the lead in payments, mobile now 30% of all US e-commerce, plus all the week’s global news stories… A survey of branchless banking apps in the developing world by the University of Florida discovered vulnerabilities that could leave users open to fraud, as well as “unfair” terms of service.

The researchers first performed an automated analysis of all 46 known Android-based money apps across 246 mobile money providers but said such an approach failed to provide “reliable insights”.

Instead, the researchers opted for a manual teardown of the registration, login and transaction procedures on seven of the apps, balancing popularity with geographic representation in what they say is the first comprehensive analysis of such apps.

São Paulo – In two months Telecommunications Operators in Brazil intend to supply the local authorities a document with economic and legal emplacements against the operation of WhatsApp, owned by Facebook, according to three industry sources told Reuters .

One of the companies in the sector studies is also bringing a lawsuit against the service, said one of the sources. The question to be submitted to the National Telecommunications Agency (Anatel) will be made against voice service WhatsApp, not on the application message exchange system, said the same source.

The telemedicine-equipped clinics each have HD video and audio tools on-site so that patients can talk to available Minute Clinic doctors at other clinics in-state, while a licensed vocational nurse in the room with the patient helps the remote doctor during the visit, according to a report in FierceHealthIT.

Mobile to take lead in payments over the next five years

Mobile phones will take an increasingly leading role in the payments space over the next five years as a result of technologies that allow safe storage of payment details in smartphones and other security improvements including biometrics.

According to a report prepared by the Consult Hyperion on behalf of Payments UK, the emergence of tokenisation, the use of Host Card Emulation and Secure Element storage in the handset, increasing availability of NFC contactless capability and biometrics such as fingerprint authentication are combining with regulatory change, consumer demand and new business models from retailers to drive rapid change. 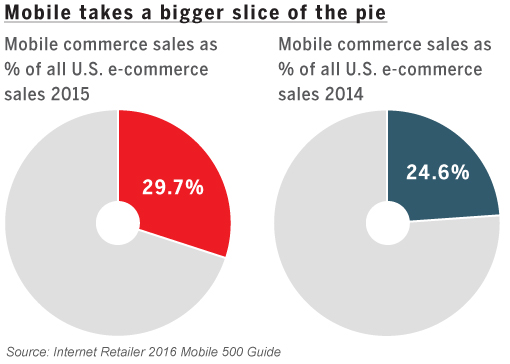 Mobile commerce is now 30% of all U.S. e-commerce

U.S. mobile commerce sales didn’t grow as fast as in other parts of the world. But data from the newly published 2016 Mobile 500 projects that m-commerce will grow nearly three times faster than U.S. e-commerce overall in 2015.

Mobile commerce continues to gain momentum as a mainstream way for consumers to shop online. In fact mobile commerce now accounts for nearly one-third of all U.S. e-commerce sales, according to an analysis of data from Internet Retailer’s newly published 2016 Mobile 500.

Last week, Samsung held a big conference in New York. While many anticipated the announcements of the Galaxy Note 5 and the Galaxy S6 Edge+, the company also teased a new upcoming device — the Samsung Gear S2. This new smartwatch looks nothing like theSamsung Gear S. It’s a smaller, more fashionable watch that will go head-to-head against the Apple Watch.

Samsung just released the short teaser video from the conference (embedded above) on its YouTube channel today. Other than that, the company didn’t say much about the smartwatch, except that we should learn more at its IFA press conference at the very beginning of September. So let’s talk a bit about the video.

Uber revs up its services in India with fresh funding

While it did not disclose the exact amount, the press statement said TOF will make a significant investment in Uber.

“Tata is synonymous with entrepreneurialism in India and I am incredibly excited to have the Tata Opportunities Fund on board as a partner,” said Travis Kalanick, CEO of Uber Technologies. “We’re particularly focused on building a service for hundreds of millions of Indians and Tata’s leadership and experience will be crucial in helping us meet this important goal.”

It turns out that when you make an unconventional phone that lets you swap out its core components, it can be hard to make that same phone stay put together — at least compared to today’s smartphones. Google’s Project Ara team has tweeted an explanation for why its pilot test plans were reworked and delayed: the current model wasn’t faring well when dropped. “No more electropermanent magnets,” the team tweeted.

That poses a challenge since Google now fundamentally needs to rethink and rework how Project Ara’s modules join together. And this time, that mechanism needs to survive typical falls (or at least match the durability of your everyday mobile phone).

Useful and Beautiful, a mobile product strategy and development company with clients in South Africa and Nigeria launched last year, with the aim to provide premier and bespoke solutions that deliver the best user experience on all mobile devices placing the user at the core.

Mobile trends show how innovation can ripple through societies, boost economies and help the continent skip over development hurdles. Mobile consumption differs in all African countries therefore mobile solutions need to be tailored.

Recent data from Digital Insight, which is owned by NCR Corp., reveals that 31 percent of consumers log into their bank’s remote services exclusively through a smartphone or tablet. This figure is up from just 7 percent three years ago.

Banks do love the level of engagement from mobile banking users. These consumers average 18 account logins per month compared with 10 logins for online banking users.

But on the down side, financial institutions have trouble enticing mobile-only customers to try additional products and services due to the limited real estate on a small screen. As a result, executives remain cautious about how to view the trend.